William Holden is one of my favorite actors ever, and he might be the one actor I was instantly struck by when I first saw him. After seeing him for the first time in Sabrina, I immediately needed to see more of his work, and 24 hours later I had seen two more of his films (Sunset Blvd. and Paris When It Sizzles — I loved seeing him and Audrey Hepburn on screen together). Since then I’ve seen more than twenty of his films, and I’ve enjoyed his performances in each of them, whether he was playing a morally complex character or the romantic leading man.

Today Holden is best remembered for his more dramatic turns in films like Network and The Bridge on the River Kwai, but for this post, I’ll be honoring one of his lighter films, the wonderful romantic comedy Born Yesterday.

In the film, William Holden plays Paul Verrall, a journalist hired by junkyard tycoon Harry Brock (Broderick Crawford) to educate his girlfriend Billie Dawn (Judy Holliday). Harry is embarrassed by how uncultured Billie is and needs her to be more presentable to the politicians he’s trying to influence. Though Paul doesn’t like Harry, he accepts the job as Billie’s tutor and finds that she’s an eager student. The two quickly fall in love as they spend more time together touring the sites of Washington D.C. And as Billie learns more about history and politics, she begins to think for herself and becomes more aware of Harry’s crooked schemes.

Paul Verrall is one of William Holden’s most likable characters (plus who could resist him in glasses?). While everyone else in the film looks down on Billie and thinks of her as a dumb blonde, Paul respects her and is a patient teacher. He also sets out to merely expand her mind and allows her to form her own beliefs, though he doesn’t shy away from stating his opinion of Harry. So, fortunately, this isn’t a Pygmalion type of story where Paul molds Billie into his ideal woman; he falls in love with her despite any rough edges she may have.

Born Yesterday is really all about Judy Holliday, and for her work in the film, she earned the Oscar for Best Actress in 1950. Holliday was up against some tough competition that year, including Gloria Swanson, Holden’s co-star in Sunset Blvd. Whether or not Holliday deserved the Oscar over her fellow nominees, there’s no doubt that she gives an excellent comedic performance. While she and Broderick Crawford serve most of the film’s jokes, Holden is perfect as the film’s straight man. And as with most of his female co-stars, he and Holliday have sizzling chemistry.

After making his debut in the 1939 film Golden Boy, William Holden’s star was slowly on the rise through the 1940s. His career finally took off in 1950, where he starred in four films, including Born Yesterday and Sunset Blvd. Holden became more respected as an actor and was Oscar-nominated for his work in Sunset Blvd., and later won Best Actor in 1953 for Stalag 17. The 1950s proved to be the best decade of his career, which included leading roles in six films nominated for Best Picture, including the 1957 winner The Bridge on the River Kwai. Though Holden’s star power waned a bit after the 1960s, he remained a prominent figure in Hollywood and continued to put out great performances until his untimely death in 1981. As he had appeared in some of the most acclaimed films of all time, he was recognized on AFI’s 100 Years…100 Stars list about twenty years later, cementing his legacy as one of the finest actors in American cinema.

Born Yesterday is just one of William Holden’s most memorable films, and if you’ve somehow never seen him in anything, it’s a good place to start. You’ll easily fall in love with him the way Billie Dawn fell for his character Paul Verrall.

I wrote this as a part of The Golden Boy Blogathon, where bloggers are writing about William Holden in honor of his 98th birthday this weekend. Click the banner below to read more posts celebrating the fine actor! 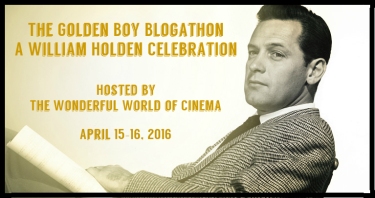