Rear Window is a special movie for me because it’s the one that really launched my obsession with classic films. I’d seen a number of old movies prior to this Hitchcock classic, but a lot of what I saw was because I had to for a film history class. I really enjoyed everything I watched for various assignments, but one particular project led me to the mystery thriller.

My professor had a list of directors to choose from, and with the director’s name were three films we had to watch and write a paper on. Alfred Hitchcock was one of them, and at this point, I’d never seen one of his movies but had heard a lot of good things about his work. The films I had to watch were Dial M for Murder, Vertigo, and Psycho. After watching Dial M for Murder I became intrigued by Grace Kelly and decided to go off course and check out the other film she made with the director that same year: Rear Window.

Lars Thorwald (Raymond Burr) has an argument with his bedridden wife.

The film is about a photographer named L.B. “Jeff” Jefferies (James Stewart), who’s confined to a wheelchair in his small apartment after breaking his leg on the job. To pass the time, he observes his neighbors from his rear window, who all leave their windows open to stay cool during the summer heat. He sees many interesting characters, including a newlywed couple, a composer, a lonely woman, and a dancer. Jeff becomes particularly interested in one window though, that of a salesman and his invalid wife. His observations then lead him to believe that a murder has been committed, and he enlists the help of his elegant girlfriend Lisa Carol Fremont (Grace Kelly) and his visiting nurse Stella (Thelma Ritter) to investigate.

Jeff (James Stewart) spots something suspicious across the courtyard.

Though the collaboration between Alfred Hitchcock and Grace Kelly pushed me to finally see this movie a few years ago, it was seeing James Stewart as the leading man that sealed the deal for me. I had only seen him in It’s a Wonderful Life prior to this film, but I loved him so much as George Bailey that I was eager to see another film of his. Stewart often played the likable everyman in his movies, and here his character is no different. Even though Jeff continually spies on his neighbors through binoculars and a camera lens, he never really comes off as a creepy guy, and viewers can easily enjoy his voyeuristic behavior.

As much of the film is confined to Jeff’s apartment, a lot of what the audience sees is from his perspective. One early example is Lisa’s introduction to the film; she’s first seen from Jeff’s point-of-view, looking as beautiful as humanly possible. This is how Jeff sees her, as the perfect woman…but perhaps one that is just too perfect for him. Though Lisa is madly in love with him, he’s hesitant to marry her because he feels their lifestyles are too different; hers revolving around the high society fashion world, and his always taking him on risky adventures. But as the film progresses, Lisa proves that she’s more than what meets the eye, and takes on dangerous tasks that lead Jeff to realize how much he cares for her.

Rear Window was released in 1954, a year that was particularly good for Grace Kelly: five of her eleven films were released, and one of them (The Country Girl) won her an Oscar for Best Actress. For my money though, Kelly is at her best in this film, and seeing her as the radiant Lisa, it’s no wonder she became a huge star despite her short Hollywood career. Today she’s one of the few classic film stars whose image is recognizable by the general public, though that may be more because her real life was like something out of a movie. Just two years after Rear Window was released, she became Princess of Monaco when she married Prince Rainier III.

Jeff and Lisa discuss the possibility of a murder being committed.

Unfortunately, this is the only film James Stewart and Grace Kelly starred in together, but they went on to become good friends afterward. Stewart even delivered a touching eulogy at her memorial service in Beverly Hills (which can be read on Wikipedia here). For both stars though, Rear Window was their second time working with the Master of Suspense. Alfred Hitchcock directed Stewart in Rope six years before this film, and they later went on to make The Man Who Knew Too Much in 1956 and Vertigo in 1958. As I mentioned before, Hitchcock and Kelly made Dial M for Murder together, and it was released only a few months before Rear Window. They made one more film together the following year, To Catch a Thief, which co-starred Cary Grant, another frequent Hitchcock collaborator.

Just like the characters, we as viewers take part in their voyeurism.

Rear Window was well-received upon its release and earned four Oscar nominations. It wasn’t nominated for Best Picture, but it did earn Hitchcock his fourth of five Best Director nominations. Neither the film nor the director won any Oscars, but it has since been hailed by modern critics as one of the best films ever made. Its influence is apparent in several TV shows and movies, and it’s even spawned off a couple of remakes. But as I’ve come to find with watching more and more old movies, nothing tops the original.

Hitchcock’s films still feel fresh today, and for modern viewers, his work is one of the most accessible of the Old Hollywood era. Rear Window is especially appealing, as it expertly blends comedic elements with nail-biting suspense, all in predominantly one location. It’s a film that can easily be enjoyed by anyone, but especially for anyone who loves a good mystery thriller. And though I’ve seen it a few times and know how everything plays out, the thrills never get old (this scene in particular always gives me the chills).

Alfred Hitchcock makes his cameo appearance in one of the windows.

I’ve seen countless classic films since watching Rear Window a few years ago, including fifty(!) featuring James Stewart and over thirty directed by Alfred Hitchcock. If this film was the seed of my growing love for classic films, I’m sure it’ll do wonders for anyone else who is hesitant to watch old movies.

Stella and Jeff watch as Lisa looks through Thorwald’s apartment.

I wrote this entry as a part of the “Try It, You’ll Like It!” Blogathon, where many bloggers are writing about the perfect “gateway films” to introduce newcomers to Old Hollywood. Click the banner below to read more entries about great classic films! 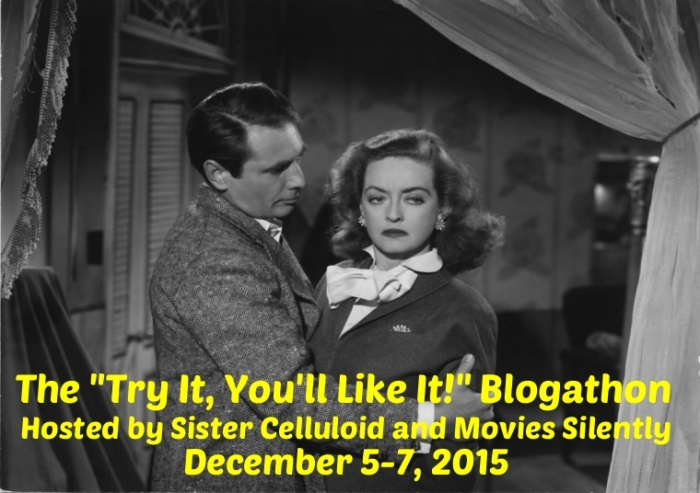